On February 17, 2003 Hein van der Voort received an e-mail from Poul Olsen of Copenhagen’s Rigsarkivet in which he presented a newly found manuscript of a hymn book. The text consists of 86 pages on which 76 hymns and a litany are written.  The print was stored in our archives and only a few hours ago, when I was working on the comparison of different versions of the hymn O! Planterman, it appeared to be different from the other hymn books by Danish translators. 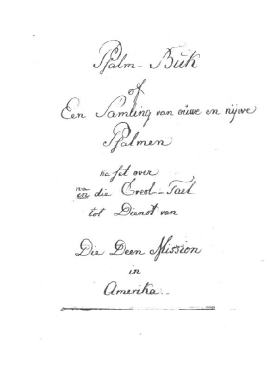 Van der Voort thought this manuscript was likely to be of Andreas Joachim Brandt’s 1799 hymn book. A closer look shows a bulk of similarities, but also differences. The title, for instance, is never used for a printed hymn book.

An interesting incidental is the presentation of an alternative preposition like I described in my Aruba presentation (to be published). The author originally used the Dutchlike preposition in, but added the Creole preposition na above of it. The word in was not erased and so it seems as if a final decision about correct use was postponed. Eventually only Creole na was used in the titles of printed hymn books by Danish translators. In the rest of the manuscript we see erased and underlined words. In most cases of the underlined words, another word or form is added in one of the margins. For instance: regt skoon ‘truely fair’, is changed into heel skoon ‘very fair’ (p. 3). The word heel seems to be more according the vernacular than regt. In the same hymn ju Geest selv ‘your spirit himself’ is changed into ju Geest Selv, as if a capital was needed to clarify the relation between Geest and selv. Capitals are always used to indicate nouns.

For his work on the VI Dutch Creole Database and Die Creol Taal 1996, Hein van der Voort studied many, if not all, available Creole texts by Danish translators. In our Bibliography he added several remarks with regard to the printing history of these sources. The information about Creol Psalm-Buk, of een Vergaedring van Oûwe en nywe Psalmen na Creol-Tael. (Copenhagen:  1834) gives  interesting information which is comparable to the metalinguistic comments I published in my former post:

Like the Gospel Harmony which was distributed in 1834 in 2000 copies, this hymn booklet was distributed in 1000 copies. This seems to me a huge number, when we keep in mind that Dutch Creole is already more and more replace by English (Creole) in the early nineteenth century.

A comparison of four versions of the hymn, O Planterman, (Wold 1770, Kingo 1770, Praetorius 1823 and Creol Psalm-Buk 1834)  shows that there are, although minor and only orthographical, differences between the latter two.

The Creol Psalm-Buk is available at the following places:

Posted in Danish sources, On the Internet