Next Thursday, May 11th 2017, my colleague Robbert van Sluijs will defend his doctoral dissertation Variation and change in Virgin Islands Dutch Creole, Tense, Modality and Aspect.

In seven extensive chapters, Van Sluijs focuses on the Virgin Islands Dutch Creole TMA-system, for instance the use of a, le/lo and ka, especially in sources which are available in the Clarin-NEHOL-corpus.

The interesting book from this creolist of Radboud University Nijmegen, The Netherlands, is published by the Netherlands Graduate School of Linguistics, LOT 453. An OpenSource-version will be available in near future. 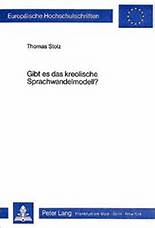 This morning, an introductory article on Negerhollands by Robbert van Sluijs was published (in Dutch) on the Dutch website Stemmen van Afrika (Voices of Africa). It is a popular scientific website devoted to showing you the languages of Africa in words, images, and sound.

Here is a direct link to the article.

Please have a look even if you don’t understand Dutch for the pictures and the two sound files  of the last speaker, Ms. Stevens (recordings by Robin Sabino).

Posted in Announcements and reviews, Linguistics

Friday, December 13th, 2013 the Morphology Meeting (de Morfologiedagen) will be held at the Fryske Akademy in Leeuwarden, the Netherlands.

The Fryske Akademy, which celebrates its 75th birthday this year, will host this edition of the Morphology Meeting (de Morfologiedagen).

The conference provides a forum for scientific debate about all possible aspects of especially Dutch and Frisian morphology. The working languages will be Dutch and English.

The day program you can find here.

Past time reference marking in Negerhollands
Robbert van Sluijs (Radboud Universiteit Nijmegen)
Negerhollands is an overseas, creole variety of South-Western coastal Dutch (West- Flemish, Zealandic), that was spoken on the former Danish West Indies, the current US Virgin Islands. A typical Caribbean creole feature is the occurrence of both overt and zero pasts, attested in Negerhollands too (Graves 1977, Van Diggelen 1978, Stolz 1986, Sabino 1986, Bruyn & Veenstra 1993). The morphological expression of past time reference in NH is preverbal (h)a, but the bare verb is used as a past tense as well. Quantitative variationist studies in a number of English-lexified creoles have shown that this variation is not random. Following up on these results, in this paper I investigate the impact of factors such as narrative discourse function, aspect, and syntactic priming on the expression of past time reference in 20th century Negerhollands through a quantitative variationist study of De Josselin de Jong’s (1926) Negerhollands data collection. The results show that the factors conditioning past time reference marking in Negerhollands resemble those in other creole languages, but with an entirely different outcome: Whereas other creoles typically use zero pasts, Negerhollands typically uses overt pasts, even surpassing Standard English in its overt past rate in narratives. Assuming that Negerhollands overt past rate used to be more similar to that of other creoles, the overgeneralization of overt pasts in perfective situations is best interpreted as an effect of language death.