14.oo u. Prof.Dr. Peter Stein: The The linguistic landscape of the Danish V.I. in the 2nd half of the 18th century, an 18-month-experience described in Oldendorp’s “Missionsgeschichte”. or: How relevant is Oldendorp for present creolistics and linguistics

14.45 u. Robbert van Sluijs MA: The origin of perfect aspect in Negerhollands.

16.30 u. Discussion and concluding remarks

In relation to Negerhollands, it contains both articles of Erik Pontoppidan (Zeitschrift für Ethnologie 1881 and Tilskueren 1887). The first one was originally published in German. The second one is translated into German by Philipp Krämer. 1)

In 2007/2008 the Leyden National Museum for Ethnology donated 19 notebooks to the Royal Netherlands Institute of Southeast Asian and Caribbean Studies (KITLV). One of the notebooks contains a typoscript of a Gospel Harmony, the other ones are manuscripts of several large liturgical texts, and all are written in Negerhollands.  The librarian/archivist contacted Hans den Besten to find out the importance of these texts. Den Besten immediately recognized the texts and their value for future research. 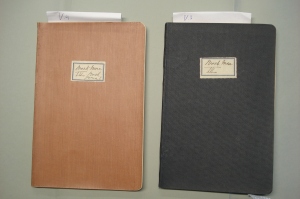 The texts appeared to be copies of Negerhollands manuscripts that had been kept in the Unitäts Archiv in Herrnhut, Germany. The notebooks have, as far as I know, been manufactured in the Netherlands, but it remains unclear who transcribed these texts. In the catalogue of KITLV these texts are dated around 1940, but I could not find a date in any of the notebooks.

In the beginning of the twentieth century D. C. Hesseling contacted Archivist A. Glitsch of the Unitäts Archiv and ordered a copy of the Negerhollands Grammar, which is kept in Herrnhut. He got the copy, paid for it and after his death, his widow donated this manuscript to the University Library of Leyden. All letters with regard to this copy are still available in the University Library of Leyden. However, unfortunately we cannot find a single clue who copied these other texts in any of Hesseling’s letters or other manuscripts. The handwriting resembles that of Hesseling, but I think it is too early to draw a conclusion about that.

A first glance in the notebooks reveals complete paragraphs of the Old Testaments that were illegible in the original eighteenth century texts we used for our Clarin-NL NEHOL corpus.

It is a nice coincidence that the typoscript is a copy of Gospel Harmony 3.2.2., the one with the metalinguistic comments in the preface.

The texts still leave us with a lot of questions, which will hopefully be answered in a next quest.