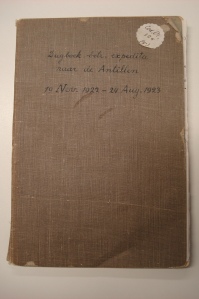 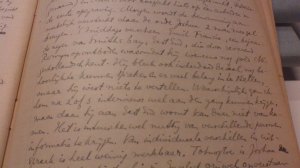 In the afternoon Emil Francis appeared, an elderly black from Smiths Bay, East End, who had been summoned by reverend Romyn because he too still had a good command of Negerhollands. It turned out that he was still able to speak the language properly and he was interested in it, , but he had nothing to tell. After two or three interviews I would probably be able to get him going, but since he lives in East End, it will not happen. Meanwhile it is quite useful to get information from different persons. Only very little is noticeable of individual differences in pronunciation, (cvr, rvs)

Emil Francis was born in 1854, and, despite his knowledge of Negerhollands, mentioned above, he only contributed just one, short text (no. XVII) to De Josselin de Jong’s Het Huidige Negerhollandsch (1926) which I present below  in normalized orthography:

The reverend who baptised me, his name is Mr. Wit, reverend of Herrnhut. I went to school in the year 1871. The schoolhouse had fallen down. So we had to hold school in the church. And there the earthquake found us and we had to run outside of the church. And my mother was bringing milk to Kwati (the school grounds?, Dutch: Kwartier) and during the earthquake she got the convulsions (she became very frightened).

After the storm the same year, there was cholera. Many people that I knew died. We could not leave Kwati. The reverend did not let us go anywhere outside of the plantation. (cvr, rvs)

De Josselin de Jong did not add an English translation of this text in his work. He just remarks that “Prince (which must be Emil Francis, cvr) remembers an earthquake and a cholera epidemic about 1871.”

On St. Thomas, the earthquake raged after an attack of a hurricane, on August 21st 1871.  All houses were damaged, but more than a hundred were destroyed. About 150 people were injured or died of their injuries.  (See Delpher for more information.)

Both photo’s: KITLV, Leyden, The Netherlands

Thanks for your help, Robbert!